An oil cooler is a fairly simple component, which means that it rarely fails. However, when doing any major engine work, it should be replaced. There are many reasons why a diesel engine can fail. And when it does, the oil cooler should be swapped out as well. 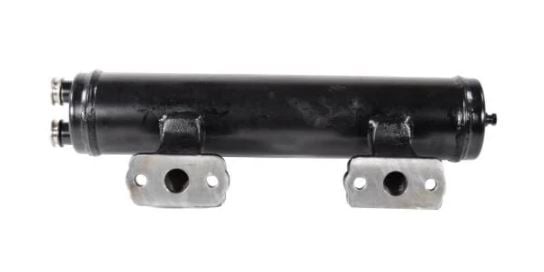 Used oil coolers are known for holding debris, making them a prime source of catastrophic engine failure. If you went through the trouble of doing a full rebuild or engine swap, a simple oil cooler replacement is the best insurance one can buy. Here are some warning signs that your diesel engine may need to be rebuilt.

As you might have guessed, the main job of an oil cooler is to bring down the oil temperature in your diesel engine. It does this by allowing hot oil to run through the main rifle on the cooler. There are several benefits to having lower engine oil temps, including better lubricity, decreased wear on key engine components, and of course, prolonged engine life.

Unfortunately, most oil coolers do not have a bypass, meaning they cannot be flushed or properly cleaned out. If debris enters the engine and is suspected to have made its way into the cooler, it is recommended that the entire unit be replaced to avoid any further damage.

Heavy-duty diesel engines found on commercial and farm equipment are commonly equipped with oil coolers in an attempt to keep engine operating temperatures in check during extremely high loads. Keeping the oil temperature within the manufacturer's specified recommendations will not only increase power but will also help ensure a long life.

Oil coolers are not all the same. They come in various shapes and sizes depending on the manufacturer and its intended application. Here are the most common oil cooler types:

A filter-mounted oil cooler is attached to the oil filter itself. The hot oil is circulated through the engine and enters the cooler before passing through to the filter. Then, the cool oil is pumped back into the engine ready to start the cycle all over again.

This method of cooling the oil is perfect for applications where space is at a premium as it uses the real estate already taken up by the engine’s radiator. It can use both cool air flowing over the fins as well as the coolant to quickly and efficiently lower the engine oil temperature.

Accurately named, a remotely mounted oil cooler can usually be mounted to the engine block or transmission. Additionally, remote-mounted oil coolers can be air or water-cooled, depending on the application.

Air-cooled oil coolers are commonly put in front of radiators or somewhere that allows plenty of fresh air to cycle over them. Similar to a normal radiator, the cool oil passes over the tubes as the air flows over the vanes. The heat is then drawn out of the oil, which effectively cools it.

Alternatively, water-cooled oil coolers rely on the engine's coolant system to lower the oil temperature. One of the main benefits is that it allows the cooler to be mounted anywhere there is available space. The physical size of the cooler can also be reduced as there is no need for additional fins that draw out heat. It just needs to be plumbed to the vehicle's cooling system.

This type of cooler can be found on most modern engines including diesel, gasoline, and even flex-fuel. They are mounted directly to the engine block and work by using the engine’s existing coolant system. Engine mounted oil coolers are ideal for high-speed applications that need additional cooling for increased workloads. If space allows, the cooler can take advantage of the engine block’s heat exchanger, eliminating the need for extra plumbing.

Oil Coolers Are Commonly Found On

Your diesel engine’s oil has many jobs. Most notably, it is intended to lubricate, cool, and clean the engine. However, as it heats up, the lubrication properties tend to break down. This is where an oil cooler comes in.

Ideally, engine oil temperatures should remain between 180 and 200-degrees. But the optimal temperature cannot always be maintained, especially for engines with a high amount of work. This is why certain manufacturers fit oil coolers to diesel engines. Some of our customers look to get auxiliary oil coolers installed to cope with increased workloads.

Why Do You Need To Replace The Oil Cooler?

As previously mentioned, there are several reasons as to why someone would need to replace the oil cooler. Replacing the oil cooler could help restore list power in your diesel engine. Additionally, it can prevent future issues from occurring as most oil coolers cannot be cleaned.

Highway & Heavy Parts has a variety of oil coolers, EGR coolers, water pumps, thermostats, and anything else you might need to keep your engine’s temperatures in check. Our wide selection of OEM and aftermarket parts is sure to get you back on the road in no time at the best possible price.

Do you have any questions about oil coolers or other diesel engine parts in general? Our ASE-Certified staff is standing by and ready to answer your questions. Gives us a call at 844-304-7688 or request a quote online today!