What's The Difference Between A Flywheel And A Flexplate In A Diesel Engine?

The terms flywheel and flexplate get interchanged a lot in the automotive industry. Although they essentially do the same job, they are not the same.

In simple terms, if your truck has a manual transmission, chances are that you have a flywheel. If you have an automatic on the other hand, it will be equipped with a flexplate.

This post is intended to expand on and answer some of the most common questions about flywheels and flexplates that Highway & Heavy Parts gets asked.

What Does A Flywheel Do?

Diesel engines that have a manual transmission are equipped with a flywheel. The engine’s crankshaft is connected to the flywheel, which in turn connects to the clutch. It acts as a sort of “middle man” for your engine and clutch assembly.

But that’s not its only job. A flywheel, while it may look simple, has many roles. From acting as a friction plate to helping the starter motor crank the engine over, this simple part plays a critical role in making sure your truck gets up and does its job every day, much like you do. Therefore, it has to be extremely durable. 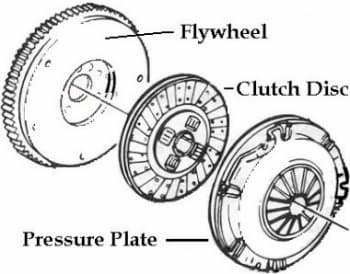 To make something durable, weight is often increased. On a heavy-duty diesel engine, flywheels tend to weigh a lot. This added weight takes more force to move, but it is a necessity if you want a flywheel to last.

A part needs to be strong enough to endure the stresses of everyday driving, but light enough so that it doesn’t end up lowering fuel economy more than is necessary. This age-old equation has been plaguing engineers since the beginning of the automobile.

Luckily, with every new truck that comes out, flywheels are getting stronger yet lighter. This all adds up to an increase in MPGs and a decrease in overall rotational mass. Unfortunately in some cases, this means that durability takes a hit. Parts that were once “good for a lifetime” now only last a few hundred thousand miles, for example.

Depending on the kind of engine you have and what it is used for, flywheels will vary in size. Back in the day, most flywheels were made from heavy-duty steel. Nowadays, we are starting to see carbon composite centers with just only the ring made from normal steel.

Old school mechanics had to rely on their knowledge, eyes, and ears to determine what was wrong with your vehicle. Nowadays, it is becoming a lost art as most trucks are being hooked up to a diagnostics computer which tells you what ails them instantly.

But not everything can be done by computers, and using your senses can help determine a problem before it becomes too late. Here are some of the most common signs that a flywheel is on its way out.

The clutch should be considered a regular service item. It is made up of pads that will wear down as you change gears in your truck. The clutch pucks or pads make contact with the flywheel when changing gears. This will of course put wear on the flywheel as well.

The smell of a burning clutch is very unique and once you’ve smelled it, it becomes instantly recognizable. A clutch and flywheel’s lifespan can be greatly affected by experience and how well the driver can shift gears. However, a burning clutch smell should not be taken lightly and should be inspected immediately as it may be a sign of other serious issues.

“Grind ‘em till you find ‘em” something that most inexperienced drivers would hear when starting out. Although in some cases, slipping gears can be the sign of a worn-out flywheel. If you can’t shift into the next gear, or your transmission pops out of gear, chances are that something is wrong with your clutch, flywheel, and/or transmission.

If you notice gear slippage, the first thing to do would be to inspect transmission fluid. If metal shavings are present, it is a good indicator that something is wrong.

Clutch vibration can be felt throughout the cab while driving. This is typically caused by a worn-out spring mount mechanism on the flywheel. If not resolved in time, it can affect the flywheel performance considerably, especially when the clutch pedal is depressed.

What Does A Flexplate Do?

As previously mentioned, a flexplate serves the same purpose that a flywheel would on a manual transmission vehicle. On the other hand, the flexplate is used on trucks equipped with torque converters, commonly found in automatic transmissions. 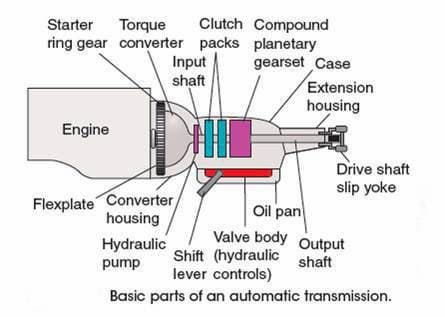 Similar to a clutch, the torque converter is located between the flexplate and the actual transmission itself. This is where the similarities end between a flexplate and a flywheel.

A flexplate is typically made from stamped steel and has a ring gear welded around its edge so that the starter motor gear can grab onto it when engaged. Since there is no clutch in an automatic transmission setup, the entire setup can be made much lighter as there is nothing that needs to “grab” onto the clutch.

But, just like the flywheel, a flexplate is used to connect to the crankshaft of your engine, helping transfer the rotational energy to the transmission via the torque converter. Over the years, manufacturers have added holes and grooves to flexplates for weight reduction and optimized balance. This helps improve overall fuel economy as there is less rotational mass, but the conventional automatic transmission setup is still less efficient when compared to a similar manual transmission.

A flexplate, just like a flywheel is prone to failure. Unlike its brother, the flexplate is plagued by its own set of issues. This section is dedicated to listing the most common problems encountered by worn-out or failing flexplates.

Oftentimes, a damaged flexplate will cause issues when trying to start the engine. If the flexplate is warped, the ring gear that helps engage the starter will get damaged or worn down prematurely.

This symptom can be felt by the engine feeling like it “bogged-down” when cranking over. In other words not turning over at the same rate.

No matter how you look at it, a knocking sound is never a good sign. Most will associate a knock with a rod bearing or other engine issues, but if it is coming from the transmission area, it is likely to be a cracked flexplate.

A flexplate is attached to the crankshaft via several bolts, similar to the hub on the rim of a car. This is where most of the stress will be, and when something goes wrong, it is likely where problems will show up. In most cases, the noise will go away when accelerating as the centrifugal force helps the cracks expand.

An out-of-round or misbalanced flexplate will tend to vibrate when turning. This can be felt in the cab and should be investigated as soon as possible. There are several reasons that unwanted vibrations make their way into the cab of a truck and one of them could be a damaged flexplate. They rotate several times per second and the smallest imperfection can cause big problems.

Need help with your flexplate or flywheel? Our experienced ASE-certified staff is standing by and ready you answer your questions. Simply give us a call at 844-304-7688!

THE PRIMARY DIFFERENCES BETWEEN REFURBISHED, REBUILD, AND REMANUFACTURED DIESEL ENGINES

WHY IS IT IMPORTANT TO BREAK-IN A DIESEL ENGINE? COMMON BREAK-IN PROCEDURES