Are you thinking of deleting your diesel engine's EGR system or keeping it as the OEM intended? Wondering if you will get better performance or if it will harm your engine in the long run?


You probably heard the stories about how much trouble EGR valves are for your diesel engine. And it's true that their history has given them a bad reputation.

We know it's frustrating to be facing expensive repairs because a part that so many people consider unnecessary has failed. You want to avoid the initial downtime and service costs associated with EGR problems. So many drivers have turned to deleting their systems from their engines. This might solve one problem, but it can create even more issues for your engine, especially if it's done poorly.

Today, we're going to take you through why people have chosen to delete, and what problems that can cause!

What Function Does The Diesel EGR System Have?

The EGR valve is responsible for the recirculating of the exhaust gas to the intake system to help increase engine efficiency and reduce NOX emissions. 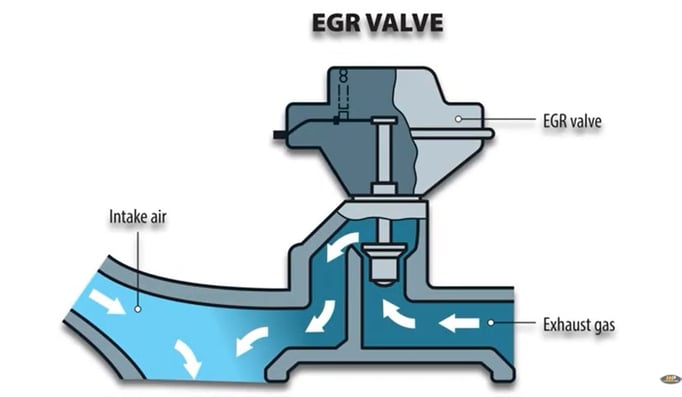 There's a lot of information circulating about EGR systems and how unreliable they are. It's true that when they first released these systems they would often leak causing excessive soot and carbon buildup.

This caused major problems in the engine and led to frequent and expensive repairs for operators. To avoid reoccurring problems and constant downtime, many operators chose to delete the EGR system from their engines.

More recently, though, the technology is improved considerably, and the components are much more reliable.

EGR Systems Have Improved But The Bad Reputation Remains

We have better EGR valves, and better variable geometry turbos and ever before. Unfortunately, the reputation has stuck, and a lot of people still think that the way to keep their engine running best, is to delete their engines. They see this as never having to worry about replacing an EGR cooler, or EGR valve again.

What some people don't realize is that yes, deleting an EGR system can help prevent some expensive repairs. But they can also cause major problems in other parts of your engine.

Why Should You Not Delete Your EGR System?

Aside from that, you can actually cause serious damage to your diesel engine. When the engine is built with an EGR system, the whole system is designed to work together. The EGR valve and EGR cooler control the amount of oxygen that's brought into the engine, which controls the combustion temperature, and keeps it within range.

When the system has been deleted, often these calibrations aren't properly taken into consideration. The compression ratios aren't changed, the temperatures aren't dropped, and the engine timing isn't altered.

Suddenly you've created an environment where overheating and high pressure could create some serious problems.

Instead of replacing an EGR valve and EGR cooler, you're looking at much more expensive repairs. This could include rebuilding an engine or replacing a cylinder head.

Calibrating Your EGR System After Deleting Is Important!

Calibrations aren't something we deal with here at HHP because they're in violation of federal EPA laws. If someone still chooses to go ahead and delete, It's important that the calibrations are done correctly, cylinder pressures and temperatures are in range, and the timing is addressed.

Nowadays there are so many calibrations on the internet forums that might seem to work. But what could really happen is they cause even more problems for your engine in the long term. It's like getting medication from a doctor that doesn't really know what the medicine is, but he trusts a person he got it from. You just really don't know what you're using.

Calibrations have become available for people because the engines have been out longer. There's no guarantee that they're good calibrations though. There might be a calibration for big horsepower but it doesn't develop that horsepower properly and you can end up with more expensive repairs.

What Problems Can Incorrect Calibrations Cause?

It's like having high blood pressure, and you don't know what's going on until it's too late. Despite these issues, some people still choose to keep their engines deleted. If that's the case, it's important to go back to the basics. Timing, compression ratios, and temperatures all need to be within specifications.

It's a risky procedure that needs to be done correctly, or your engine will be at an even higher risk for failure than ever before.

WHY IS MY DIESEL ENGINE EGR VALVE FAILING?